SUBANG, 1 August — Prasarana International Training Academy in Rail (PINTAR), formerly known as Rapid Rail Academy, has added three new strategic partners under its collaboration initiatives as part of its efforts to further promote and upgrade Malaysia’s rail industry; as well as to enhance the Academy’s branding as a premier centre of rail training technical training.

Under the memorandum, PINTAR and UNITEN will be working closely in the rail electrification where the Academy hopes share the knowledge and expertise of the university and its parent body, Tenaga Nasional Berhad.

With DRB-Hicom University, Rapid Rail hopes to establish PINTAR’s East Coast training hub; which will further develop as a training branch for the academy to cover training requests from the east coast region. Through the collaboration, Rapid Rail and PINTAR also hope further enhance its relationship with DRB-Hicom Berhad for the benefit of the engineering community.

Similarly, with its agreement with KISMEC, Rapid Rail hopes to establish PINTAR’s training hub for the northern region to cover training requests from there as well as to optimize the resources at KISMEC, which is equipped with high technologies facilities. Prior to today’s signing, PINTAR has already established official collaboration via MOU with Universiti Kuala Lumpur on 2016 and both Universiti Technology MARA and Institution Engineers of Malaysia (IEM) in 2017.

Originating from the training centre for PUTRA LRT before promoted as Rapid Rail Academy, PINTAR has been carrying out the responsibility to produce technically skilled and competent Rail personnel in manning Rapid Rail systems and subsystems operation and maintenance for almost 20 years.

The Academy was officially renamed as PINTAR on 16 May 2018 after receiving the official recognition letter from Skills Development Department or Jabatan Pembangunan Kemahiran (JPK) of the Human Resources Ministry, which acknowledged PINTAR as an International Training Academy for Rail in Malaysia. The department also recognized PINTAR as the leading player in urban rail operation and maintenance training.

PINTAR has gain recognition as JPK full Accreditation Centre via letter from the ministry dated 22 December 2016. This recognition allows PINTAR to offer Malaysia Skills Certification program not only for Rapid Rail staff; but also for members of the public.

PINTAR has become the referral point by external parties, local and international in the area of human capital development. PINTAR have also designed and developed programmes for the specific needs of organization i.e MRT Jakarta, Nigeria Transport Secretariat, Makkah Mass Rapid Transits Company among others.

PINTAR is a strong proponent of the Technical and Vocational Education and Training (TVET) as the Academy believes that Malaysia could hybrid the educational system by adding the knowledge and skills required in the real work place. In addition, the study of technical as well as the acquisition of practical skills, attitudes, understanding, and knowledge relating to occupations will occupied the personnel to be make workers more skillful.

Speaking at the ceremony, Haji Khairani said he hoped that the collaborations would enable Rapid Rail to gain inside track on emerging trends, new ideas, experience and technologies developed in universities.

“This, in turn, will give opportunities to Rapid Rail on human capital enhancement, research and development and other areas. We also hoped it will help further establish wide networking through various channel of institutions; and that in turn, will enable Rapid Rail to explore more potential of beneficial business and projects by complementing each other’s resources,” added Khairani.

Deputy Vice Chancellor Prof. Dato’ Ir. Dr. Ibrahim bin Hussein in his comments said: “UNITEN, a wholly own subsidiary of TNB, believes MOU between UNITEN and PINTAR signifies the relentless effort of continuous improvement related to the future of rail industry in Malaysia. We foresee that rail electrification is something that we want to participate actively in”.

Prof. Dato’ Sr. Dr. Omar bin Osman said,: “Rapid Rail – DRB – HICOM University collaboration will benefit the country as a whole in the form of providing invaluable opportunities for its young generation to equip themselves with advanced knowledge and the state-of-the art facilities of the urban rail industries.”

In his comments, Encik Mohd said: “KISMEC, a TVET centre established since 1993, is honoured and proud to be appointed as PINTAR strategic training partner. We believe this initiative puts the rail industry human capital development on the right track”. 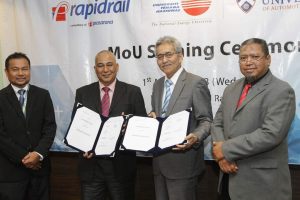